Dad Bod? Dude it’s 2017.
I know, but it’s time for me to clarify the REAL reason why the Dad Equals Bad Bod, and it’s not what you think.

Back in 2015, I’m sure you heard about the Dad Bod phenomenon where a blog post claimed more women were attracted to men with a belly bulge because it was more natural, human, and attractive.
Even though Jessica shared her thoughts on it in a video, I actually just kept my mouth closed about the trend.
Because honestly, I thought it was ridiculous, and I couldn’t speak to the fact that…
a) I wasn’t a women
b) I’m not attracted to other men…
…and c) who cares what other people are attracted to. You do you.
But fast forward 2 years, and I know feel like I can have a say in the matter because…
No I’m still not attracted to men…
But I’m now a proud dad of a beautiful baby girl named Kyla.
And this major shift in my light opened up my eyes even further to the REAL reason why as dad’s we need to level up past Dad Bod status.
Sure it’s human nature to want other people to find you attractive, BUT as a new dad we also have a major role to play in your child’s life.
Yes, it’s to provide clothing, food, and shelter…

But what I’m really starting to understand is that it’s also super important for us dads to be the healthy, lean, and strong role model your kids deserve.

Even though Kyla’s only 5 months old, I see her watching my every step.
Once your kids get a little older, they’ll be just like sponge, soaking everything you say and do, and copying your every move.

So think about it.

Is the visual of the Dad Bod, and the habits that create it, really what you want your kids to learn from you?

And one other huge thing.
The bad foods you’re eating to create your belly bulge don’t just pack fat around your abdomen, they also build up a toxic wrap around your internal organs, and severely increase your risk of diabetes, heart disease, inflammation, and stroke.

Is that really the example you want to set for your kids?

Is that really the food you want them to eat, and then have them pass that on and teach your grandkids to do the same?

Do you even want to be around to see your grandkids?

Belly fat doubles your risk of an early death.

So don’t use this stupid Dad Bod phenomenon as an excuse to skip your workouts and eat whatever you want.

The Dad Bod debate shouldn’t be just about the appearance.
It’s so much more than that.
It’s about what’s happening inside your body that really counts!
Remember, if you look down and see you’re bigger around the middle.
It’s also a sign you have a bigger chance of health risks, bigger chance of a short life, and bigger chance of unhappy kids.

As new dads, I’m not saying you have to live 2 hours in the gym every day and deny yourself of pizza forever.

That’s not how we roll as Live Leaners.
It’s about finding the balance of eating healthy, getting in a hard but fast 30 minute workout, and enjoying a weekly cheat meal and beer.
Make this a priority, and watch your belly flab and your health risks drop, and your years of happy times with your kids increase.
And most importantly, watch the example this sets for your kids.
Be the superdad healthy role model your kids deserve.
So if you look in the mirror and see a squishy midsection, it’s time to change.
And I have just what you need.
Say goodbye to the dad bod before it says goodbye to you forever.
Let me help you with that… 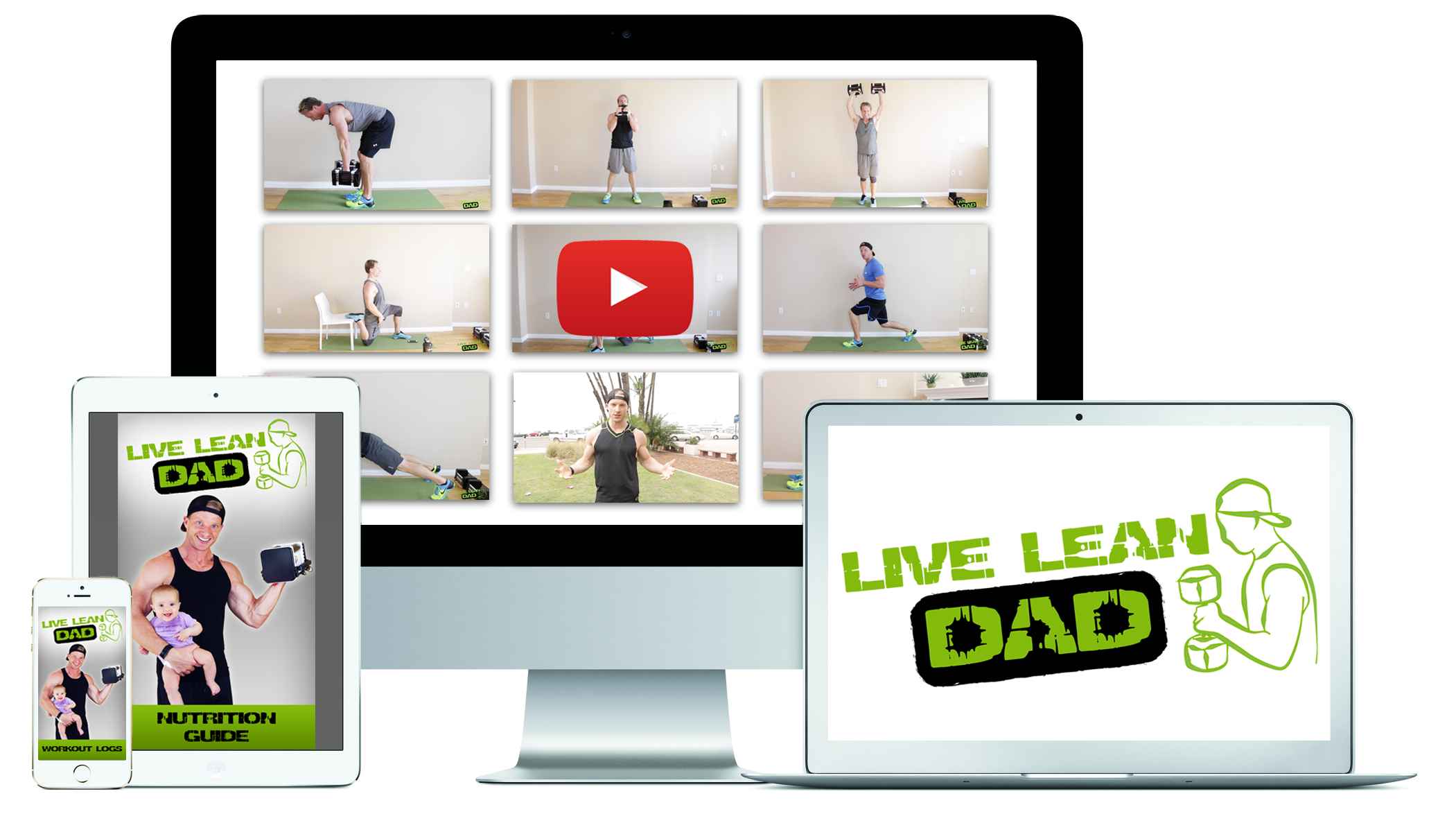 In just 30 minutes, from the comfort of your own home, stand out from all the other dads, by dropping those 10 pounds of pregnancy chub and become the FIT, LEAN, and STRONG role model your kids will look up to FOREVER.

The 42 day Live Lean Dad Training System is designed to improve the health, physique, and confidence of busy new dads like you, with 30 minute, at home, follow along workout videos, that only require a set of dumbbells, so you can spend less time in the gym and more time with your kids.

Are you ready to BECOME THE HEALTHY, LEAN, & STRONG ROLE MODEL YOUR KIDS DESERVE.

LiveLeanDad.com is your first step.
I’m over there ready to help you put in the work.
Lets go.

I love you guys and keep Living Lean.

If you enjoyed today’s episode, make sure you subscribe to my Live Lean TV YouTube channel as we upload new episodes every Monday and Thursday.

I love you guys and keep Living Lean.

One response to “Why the Dad Bod Equals Bad Bod”